A while ago I published a post explaining the setup of the Quizzing Master slides, compulsory parts of each theme, even the almost empty Blank theme. In this article I will try to explain my experiences using Fluid Boxes on Content Master slides. Most themes shipped with Captivate have several content master slides (exception = Blank theme). Let us first start with the master slides that are not behaving like the content or quiz master slides.

It is not possible to insert Fluid boxes on the main master slide: the button seems active but both options (Vertical and Horizontal) are dimmed. Objects placed on that Main master slide, and inherited by the daughter master slides, are to be set up using the Position Properties panel. Example: the text container with my name and copyright in the example movie.
As you probably know, it is not possible to have shape buttons timed for the rest of the project when you use Fluid boxes. You could put a shape button on the main or one of the other master slides but you cannot control it because it has no ID. In the example movie I preferred to have a Next button on the individual slides, because ton most slides it is hidden until the learner has visited everything. However a toggle shape button for Audio, for CC, for the TOC could be on the Main Master slide. They will not behave like objects in a Fluid box however, but act as defined on the Position Properties panel for size and location.

However after some more testing on iOS devices, the Position properties set up for those objects are not correctly displayed in portrait mode.

TIP: at this moment avoid putting objects on the Main master slide (except background of course), since they don’t display at the correct location on some mobile devices.

This master slide has no Fluid boxes by default but you could add them. As I have explained in previous articles, you should prefer to duplicate the master slide for editing, don’t edit the original slide because it is used for Powerpoint import and for software simulations.

That master slide has one Fluid box (parent fluid box) but no child fluid boxes. It is set up as ‘Squeeze in a Column’, and vertically and horizontally centered. Since the Title Placeholder is inserted directly in this Parent Fluid Box, you are not able to add child fluid boxes.  Because each new project, using the default theme White will start automatically with a Title slide, this has caused already many frustrations when starting with the use of Fluid boxes. If you want to use fluid boxes on the first slide, you have to change the master slide from Title to Blank (exception Blank theme which starts with a Blank slide).

It can be a time saver to use a content slide that has already Fluid boxes. In a future next article I’ll explain how to create a custom content master slide with the help of Guides, but for now let us focus on an existing master slide, and see how we can tweak it.
In the example movie, the second slide is based on the Content04 master slide from the Theme ‘OldPaper’. I didn’t customize the theme, just applied the correction explained in my last post

Look at the setup of the Fluid boxes on the master slide: the parent fluid box (FB_15) has two vertcial child FB’s (FB_16 and FB_17). The top one is meant for the Title placeholder: 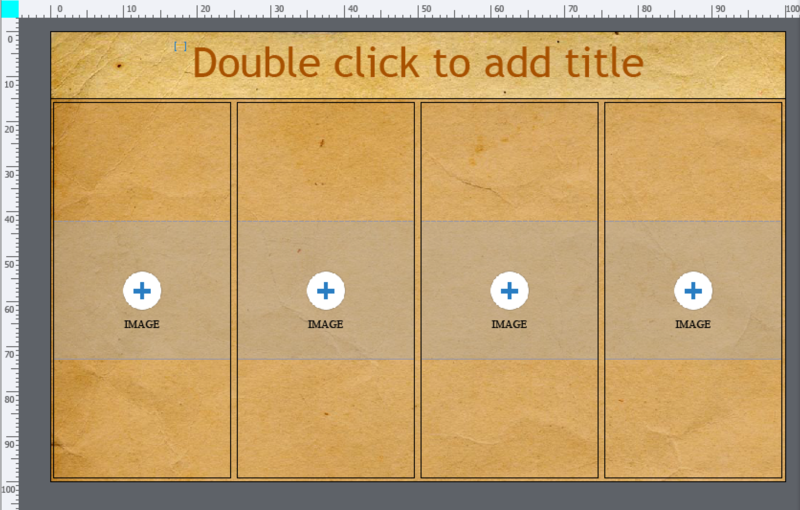 The bottom Fluid Box has 4 child FB’s, (FB_19,FB_20, FB_21, FB_22), which are set up to wrap Symmetrically (when width is too small, two FB’s will move to the next row), and have a padding both vertically and horizontally to have some spacing between the FB’s. Each of them has a placeholder for an image.

Play with this responsive movie (will open in a new window) which has only 3 slides: Title slide (with inserted Next button, and taking over my name from the main master slide), a slide based on Content04 master slide, with a lot of tweaking, and an End slide. On the content slide you are supposed to click each of the 4 buttons in the top. The Next button on that slide will only appear when you have clicked all available shape buttons and seen all the content.

The FB setup on the master slides can be tweaked on a slide based on that master slide. You can remove all fluid boxes, but that has not much sense. To demonstrate I did a lot of tweaking for the second slide of the movie which you just watched:

You will have seen that I always had Rulers and Guides activated. My next blog post will focus on the use of that great tool, which almost no one seems to use?

Sure, I have several advanced actions in that movie, but that was not the goal of this post. No explanations here about those actions.

Legend 245 posts
Followers: 395 people
Follow
Lieve Weymeis Follow
Lieve is a civil engineer (ir) and a professional musician. After years of teaching and research (project management/eLearning/instability) she is now a freelancer specializing in advanced Adobe Captivate as trainer and consultant. Her blog is popular with Captivate users worldwide. As an Adobe Community Expert and Adobe Education Leader, she has presented both online and offline. Since 2015 she is moderator on the Adobe forums and was named as Forum Legend (special category) in the Wall of Fame. In 2017 Adobe Captivate users voted for Lieve as a Top Content Experience Strategist.
(11)
(10)

I have a couple questions:

Jim, I hate the word ‘ribbon’ which is typical MS, and has nothing to do with the Big Button Bar in Captivate. A ribbon is context sensitive, which is the BBB not at all (you know my passion for correct terminology).

You don’t have to use the default Title master slide (which is even not available in the Blank theme), you can create another master slide.  I recently trained several users about themes, and was very frustrated by the lack of understanding themes although some of them has taken many training courses. Whenever I create a project I start by creating the theme, often in this sequence: Color palette, styles, master slides, skin. As placeholders I keep to text placeholders, never use the image placeholders since they force the image to the preset size. I use a Title placeholder in most cases, but with the object style I defined which uses my choice of font, and one of the colors of the color palette.

All the interactions I have been using were functional in a fluid box. Even those that seems to have stacking objects (like Accordion).

“Big Button Bar” works for me. Easier to remember.

That’s great that many of the learning interactions seems to work.

I’m using the “Pearl” theme, which appears to be my default. There seems to be a default title slide. Given that Adobe uses certain objects to collect information (e.g., like in the questions) I was concerned that modifying the default title place holder might prevent a variable value from being collected. Sounds like modifying it won’t interfere with another function.

I don’t know why they put Pearl as default theme, since it is a very ‘poor’ theme, only has a greyscale Theme colors palette, which is not respected in the styles. Very bad example of a theme. The Blank theme which is much better as starting point for a custom theme is not even available in the thumbnail dialog box under Themes. You need to use Browse to find it in the eLearning Assets under 11_0\Layouts.

Quiz master slides are special because they have ’embedded objects’, which are objects without an individual timeline. Placeholders have such a timeline, they are not embedded, have no linked functionality.  Wished all CP-users took a course about Themes, would spare them a lot of time.

Thanks for the tip on the Blank theme. I will check it out.

You’re welcome. The post about using Guides has been posted already.

For me it’s the first touch of fluid boxes. It makes my life easier. Thank you.

Really looking forward to the next blog post on using rulers and guides. Thanks for the great info!

Thanks, Jeff. Undocumented, but relevant to use fluid boxes on master slides which are part of Captivate’s theme. Too much ignorance about themes in the community. Have a look at the related blog posts about the quizzing master slides and the use of Guides for setting up master slides with fluid boxes.

Very detailed breakdown. Thanks for this, Lieve!