About two weeks ago Captivate 10, now labeled Captivate 2017 was released. If you did visit my blog in the past, you know that I prefer to wait a while before posting my first impressions. My focus is also more on the non-hype features added in this release, I call them the ‘hidden’ gems. Some are mentioned in the documentation, some not.

This week I discovered an undocumented enhancement thanks to a user on the forum:

When using the Submit All feature for a quiz, up till now it was not possible to localize this popup dialog box (style can be changed using the Object Style Manager):

In Captivate 2017, the dialog box whidh appears when you click the option ‘Submit All Messages in Quiz, Preferences has all you need to localize everything. In previous versions this dialog box had only 3 items. 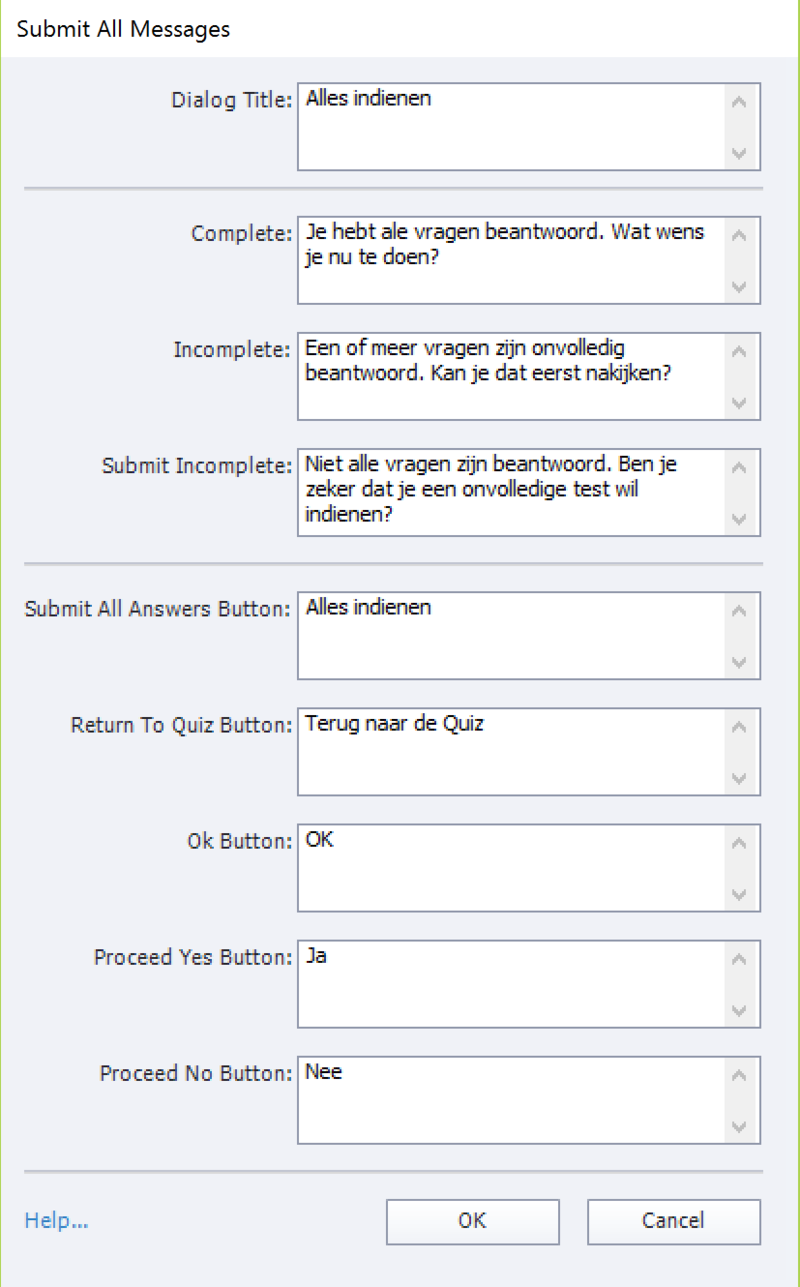 Captivate 9 was the first release which could be used on retina screens. However to record a Video Demo or a Software simulation you did have to edit the AdobeCaptivate.ini file. It was a solution, but bit cumbersome. After the capture process you had to edit that same file again to be able to use Captivate on that screen.

In Captivate 2017 this is no longer necessary, thanks to the Adobe team!

Just one tip: if you are on Win10, check the Display setting before recording (both Video Demo/Software Simulation). The OS tends to set the display setting to a percentage higher than 100%. You’ll have to reset it to 100% before the recording to avoid problems.

The Advanced Actions dialog box has been refurbished, and many will have emphasized that it is now easier to combine standard with conditional actions. Personally I don’t find that so important because the condition ‘IF 1 is equal to 1’ worked as well, but much more has changed. I will post an article later explaining the changes in the dialog box more in depth.

The existing functionality for multiple decisions in former versions has been preserved: adding decisions, moving decisions, duplicating decisions. The buttons got another look as you can see on this screenhot. There has been added two extra time savers,  if you have a lot of decisions in one advanced action: 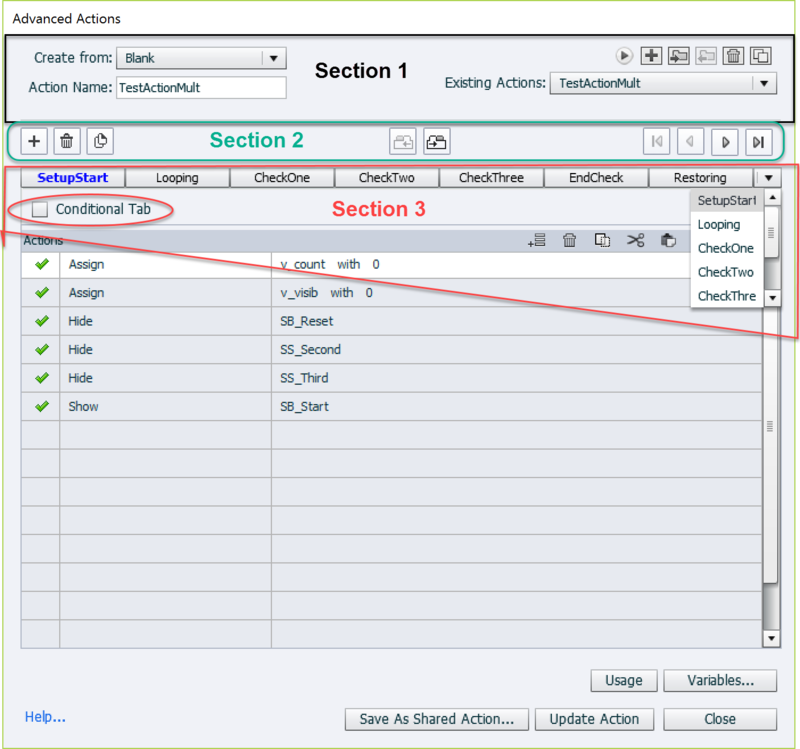 I am very happy that the commands ‘Go to Next State’ and ‘Go to Previous State’ (one of my first feature requests when multistate objects appeared) are now available in the list with commands in the Advanced Actions. In Captivate 9 there were only available as simple actions (Actions Tab dropdown list). This improves efficiency quite a lot, as you will see in the example movie below.

It has taken a ‘while’ but finally we have a looping possibility in Advanced actions, no longer needed to switch immediately to JavaScript. In combination with the command ‘Delay Next Actions…. ‘ a lot is now easier in advanced or shared actions. Just one pretty easy example: create a countdown animation by combining a counter variable, a while loop, an effect and that Delay command. While loops can be combined with standard and conditional decisions as well.

This short example has two slides:

If Flash player is enabled in your browser, you can test this movie (SWF) online in my personal blog

You can download the published HTML5 version from this link.  You’ll have to unzip the folder, and launch the index.html file.

Finally we have access to the Typekit Library (I’m used to it using CC applications)! In the example movie I used two fonts which I already acquired with a CC subscription (Fira Sans and Rosario), but Typekit also has a free license. You have to check it out, time to get away from those limited set of websafe fonts. When publishing with Typekit fonts, you’ll need to add a domain name. For testing purposes you can choose for ‘Local host’. If you are collaborating on a project, you’ll have to be sure that the collaborators have a Typekit license as well. In that case when opening a Captivate project, Tk fonts will be synchronized on their system.

A lot of articles and tutorials have been published already to acclaim the use of Fluid boxes in responsive projects. However I am also happy that the ‘old’ way with Breakpoint views is still available as well. If you upgrade a responsive project from a previous version (8 or 9), it will automatically show in the Breakpoint view mode, since the development has happened in that mode. After two weeks with Fluid Boxes in CP2017 I don’t have enough experience yet to judge their full power. My first impression is that the kind of project will indicate (dictate?)  the choice of the development work flow:

Tip: to switch to Breakpoint view development use this option in the Project menu: 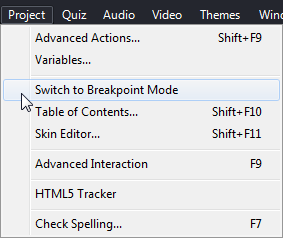 The possibility to change a normal (blank) project to a responsive project is a much asked for, very useful addition. The reverse is not yet possible, responsive to non-responsive.

After some more experience with using Fluid Boxes, my opinion could change of course. Anyway I am persuaded already that the customisation of the theme is more important than ever. If you wonder why, maybe have a look at this article: ‘Exploring Themes and Templates‘

This personal view on the new features/enhancements in version 2017 (10 under the hood) is based on a limited time of exploration. In a future blog post (or showcase) I will give more details about the creation of the example movie. As promised, the overwhelming number of buttons and features in the new Advanced Actions dialog box will be the subject of another tutorial. At least, if you find this useful?

Looking forward to your comments. Do you have questions, use cases that you cannot figure out if they are possible? Fire away…

Legend 228 posts
Followers: 362 people
Follow
Lieve Weymeis Follow
Lieve is a civil engineer (ir) and a professional musician. After years of teaching and research (project management/eLearning/instability) she is now a freelancer specializing in advanced Adobe Captivate as trainer and consultant. Her blog is popular with Captivate users worldwide. As an Adobe Community Professional and Adobe Education Leader, she has presented both online and offline. Since 2015 she is moderator on the Adobe forums and was named as Forum Legend (special category) in the Wall of Fame. In 2017 Adobe Captivate users voted for Lieve as a Top Content Experience Strategist.
(16)
(11)

I am so grateful as a new user to be able to have access to honest, helpful expertise from so many advanced users. Thanks for this post, it was very useful to get your viewpoint.

Thanks Joe and Shambu, that is indeed my opinion as you both know very well. I feel very sad when I see all the half-truths published everywhere and no one doubts that I am a fierce Captivate defender (my nickname with ACP’s). If my opinion changes about Fluid boxes, I will be happy to tell that as well.

Tell me about it! I spent way too much time trying to set the record straight on a vicious anti-Captivate post on LinkedIn a couple of weeks ago, and it has continued. However, much like arguing religion, everyone seems to want to say that they have the one true authoring tool and all others are false. Sigh.

We have to ignore the haters! My response to them would be Good, Cheap, or Fast. Pick two! I’ll take the more powerful tool that creates quality e-learning any day of the week and twice on Sunday.

You’re welcome. I’m not following the global hype that Fluid Boxes are suited for any project, after having tried out on several projects. It is a great way to create quickly a project that will show the content on all screens, whatever their size. But you’ll pay for that by giving up control and you’ll have to accept the limitations in type of items to be used. This is not meant as criticism for the feature of Fluid Boxes, which is a great feature, it is about being realistic.

I completely agree. My experience has taught me the same. Both Fluid Boxes and Breakpoints are great features for different situations.

Maybe some people do not like my honest opinion however, thanks for the support. Use the right tool for the right purpose, don’t use a screwdriver to drill a perfect round hole.

I believe if we’re not honest, we will lead those still learning into incorrect assumptions. Let’s stay honest.

Lieve Weymeis Other term is passionate! Thanks for all your honest feedback!
Joe Ganci Absolutely that’s how we make a Product world class!